I cannot turn on my own television.  Seriously.

And when I typed that first sentence, I mentally deleted at least four expletives before getting to the period.

I have three college degrees, graduated with honors, made all A’s in graduate school, and yet, I cannot figure out how to turn on the EM EFFING television in my own house.  To say I am frustrated does not even come close to being an understatement.

I mean, it was a beautiful day, my day off from teaching, and I wanted to do my school work on the screened porch so I could revel in a 70-degree day in February, so that I could soak up every bit of warmth because it is FEBRUARY in the South.  I know it may very likely snow within the next twenty-four hours.

But I could not turn on the TV.  My first response, of course, was to text my husband to express my frustration about this issue with our “Smart TV.”  I even took a picture of the “Emergency Alert” message on the television screen, a message that did not, as promised, “exit automatically”:

His response?  “Oh yeah, just turn on the TV in the living room and clear that message there.”

In whose mind does this process make sense?  To turn on one television, I have to go inside and turn on another one?  Who came up with this idea? And guess what?  When I went inside to turn on the other television, IT DID NOT COME ON.  Thus, here lies the fancy, complicated remote on the floor (No, our puppy Ax did not have an accident in the house; Mommy did.)

Once I recovered from my hissy fit, I picked up that durn remote again, determined to win this fight.  (Did I mention I am supposed to be smart, maybe even as smart as a Smart TV?)  For this attempt, I decided to push not the “TV Power” button or even the “Live TV” button – because that would have actually made sense – but the “TiVo button.”  Voilà!

I find some solace in the knowledge that others can commiserate with me about the remote control.  Even Glennon Doyle Melton, author of Love Warrior (and friend of Oprah!) encountered the same can’t-turn-on-my-own-television dilemma after her separation from her husband.  Her description made me feel a little better:  “And last night I finally got the kids to bed and I was tired all the way through to my bones, so I melted into the couch.  I picked up the remote, and I couldn’t get the damn thing to turn on the TV.  Fifty buttons on that thing and not one button said ‘on.’ . . . So I pushed every button six times and worked myself into a rage and considered smashing the remote into pieces” (157-8).

I get it, Glennon.

It is some kind of conspiracy, for sure.  Remotes are obviously phallic symbols that not so subtly remind those of us without Y chromosomes that we as not as powerful and smart as we may think!

I do not typically complain about – much less write about – such a silly event, so I know there must be some underlying issue that makes me so furious about the remote control situation.  I mean, really,  in the grand scheme of the issues confronting people each day, what is the big deal about not being able to turn on my TV?

Perhaps what is really going on with me stems from fear.  True, I am feeling a bit frightened every day lately as I watch our “so-called” President’s daily Twitter rants.  Plus, I am a woman, so what “woke” woman is not scared as hell when listening to this man’s hyperbolic speeches about “fake news,” ”tremendous” everything, “I’ll see you in court!” threats?  Not to mention a Secretary of Education (God, help us) who commented that we need guns in school to protect kids from grizzly bear attacks.  Alas, what will protect our kids from her?

So, yes, I am afraid of many things these days, but the most palpable fear for me is more personal, more mortal, maybe more downright depressing.

As I get older, I realize just how little I know about the ways things in my house work and how much I depend on my husband Kelly to know everything, to fix everything, to figure out everything.  And while Kelly does not mind taking care of absolutely Every. Single. Thing., I am afraid.

I am afraid because we just lost his father after years of Alzheimer’s, and whenever I cannot figure something out for myself – like how to work the remote! – I think of the what if’s.  What if the same thing happens to Kelly one day? What if one day he has Alzheimer’s, and I am left to figure everything out?? I can’t even turn on the TV without him!

I am afraid because I have relinquished not just control of – but understanding of – some components of my everyday life.  When did that happen to me?  When did I become comfortable with not knowing how things work, as long as they do?  When did I stop taking care of all the household and family minutia and let my husband (who really does know how to work everything!) do the taking care?  Have I become lazy?  Has life become too complicated? What if I have forgotten the beliefs I have always held dear, that Thoreau mantra to “simplify, simplify, simplify”?  I  have a sign in my home that says, “Simplify,”  and yet, I am surrounded by 65-inch Smart TV’s that require not walking up to them to change the hundreds of available channels but navigating three different remotes just to watch “Scandal.”  (And Lord help me if someone before me used the surround sound because that requires another remote…)

So while many people see a television remote as a device of convenience allowing us to relax in our recliners and scroll through channels effortlessly, I  (literature teacher through and through) see it as a phallic symbol representing my powerlessness and – even worse – my complacency.

I see it as a reminder to wake the hell up, Girl, and figure things out for yourself. 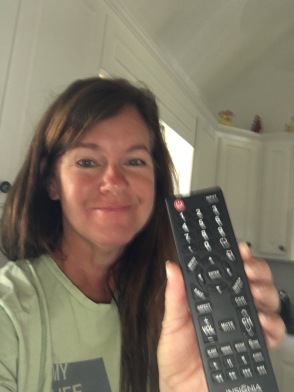